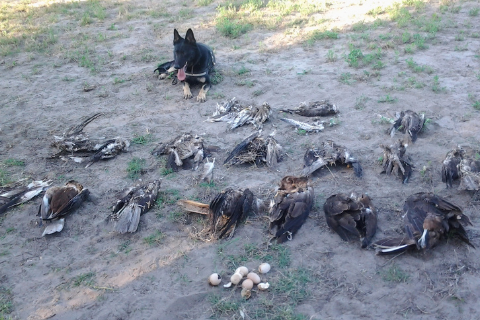 In February 2021, BirdLife Hungary experts published an article in the Journal of Vertebrate Biology: “Using detection dogs to reveal illegal pesticide poisoning of raptors in
Hungary”, which presents the dog unit’s results of the past seven years with scientific detail, and describes how effective search dogs are in locating carcasses. This article is an excerpt from this publication.

Since 2013, the poison and carcass detection dog (PCDD) unit of BirdLife Hungary has played a key role in the fight against illegal poisoning birds of prey. In seven years, they took part in more than a thousand field searches and helped detect 454 poisoning-related crimes with the found evidence. 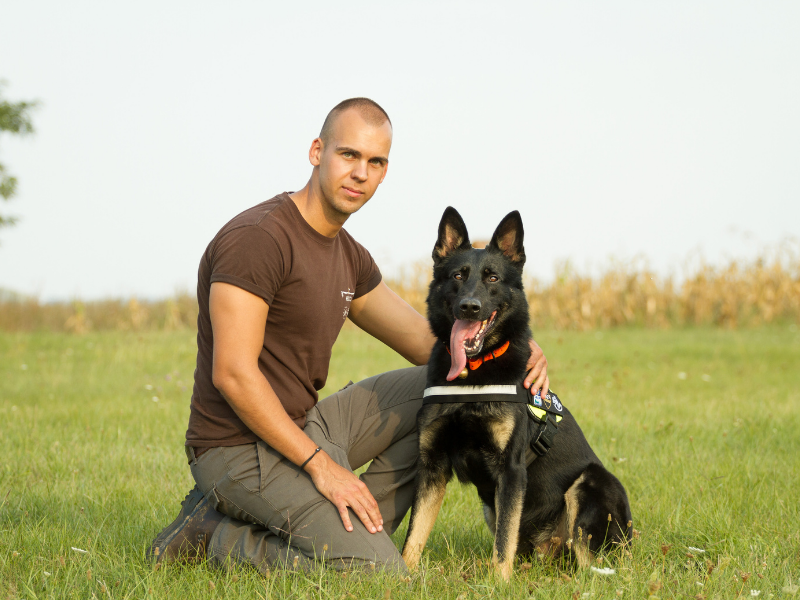 The dog unit at the beggining; Gábor Deák and Falco (Photo:Oszkár Dániel Gáti).

From the beginning of the 2000s, pesticide poisoning became the most important threat for raptors in Hungary, especially for the globally threatened Eastern imperial eagle (Aquila Heliaca). Compared to the number of individuals  - besides the White-tailed eagle - this species has one of the highest rates of poisoning related mortality. 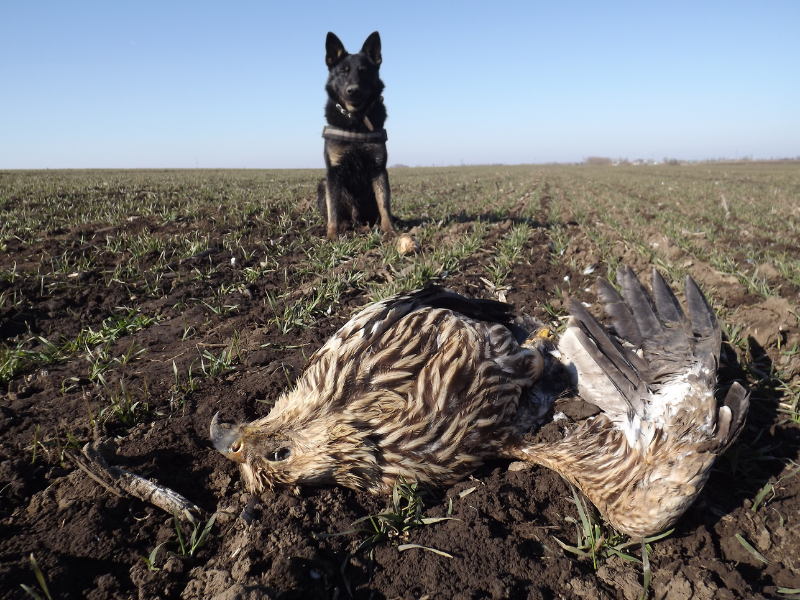 Falco with the acrcass of an Imperial Eagle (Photo:Gábor Deák).

The Imperial Eagle is a globally threatened species with a global population of a mere few thousand pairs. Within the European Union, Hungary has the largest population, so the mortality caused by poisoning significantly endangers the conservation status of the species.
Some of the raptor poisoning is a result of legal rodenticide misuse, while others are come from the illegal use of unauthorized or banned substances specifically intended for “undesirable” predators.

The detection of poisoning cases has been assisted for seven years by the dog unit of BirdLife Hungary - established within the framework of the Helicon Life project. Gábor Deák and his dog, Falco started their ground breaking work in 2013, after completing the four-month long special training at the Service Dog Training Center of the Hungarian Police in Dunakeszi.
Poison detection training was conducted in a manner similar to that developed for drugdetection dogs, only to find carcasses and the most commonly used poisons instead of drugs. In the meantime, two other dogs have joined the unit, a Belgian Shepherd named Carlo in 2017 and Hella, a German Shepherd, in 2020. 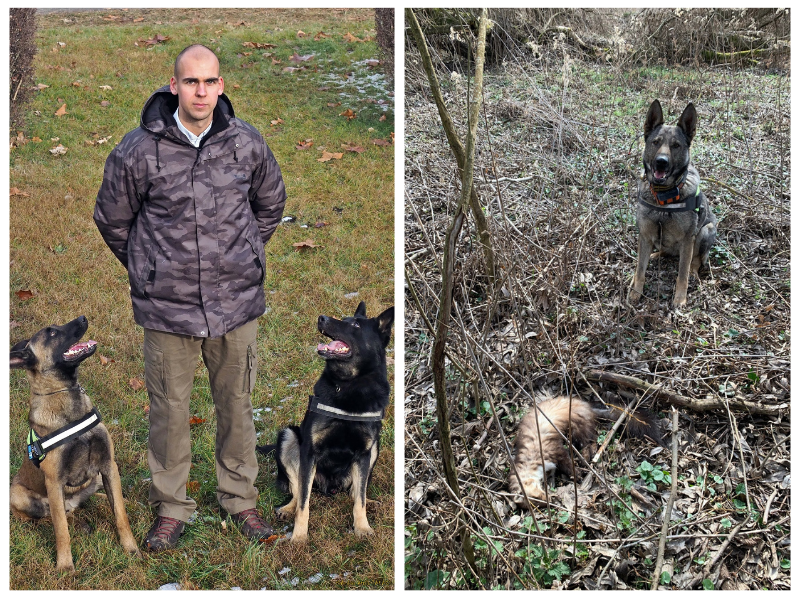 Even on a European scale, Hungary is among the first countries regarding the number of intentional poisoning raptor birds. The experience and data of recent years show that search dogs achieve outstanding results in the detection of poisoning cases. 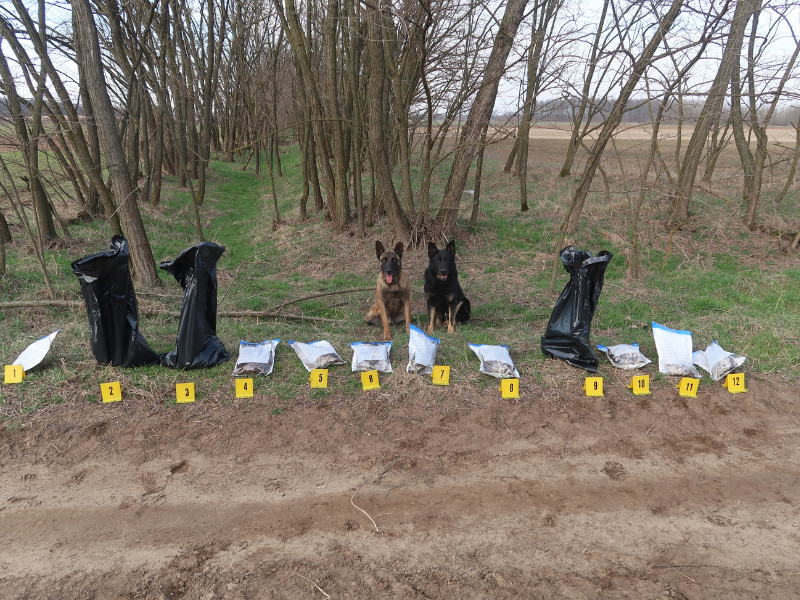 Since their launch in 2013 until August 2020, the PCDD has carried out 1 083 searches in five countries, with 329 poisoned animals, 120 poisoned baits and 5 poisonous substances (i.e. pure pesticide products). The poisoned animals belonged to 15 bird and 9 mammal species, including 13 protected and 2 globally endangered species. Compared to human surveys, the PCDD unit demonstrated a signiﬁcantly higher ﬁnd rate both for carcasses and poisoned baits. 80% of the poisoned baits had been found by the dog unit exclusively, preventing these poisoned baits to enter the food chain and cause further devastation.

The dogs are equipped with a GPS collar to track their movements (Photo of Falco: Sándor Jakab, map source: MME)

Most of the intentional poisonings are caused by pesticides containin carbofuran, a substance, that is banned in the European Union since 2008. Although dogs were trained to search for the two most common toxins, laboratory tests revealed seven additional toxins in the carcasses and baits they found.

The majority of the poisoning cases occurs in spring

Poisonings occur in all parts of the country, but the majority of cases are related to the agricultural areas of the Great Plain, most often between February and April. This early spring peak clearly coincides with the predator control activities by hunting organizations.
Apart from Hungary, the dogs and their owners assisted police investigations in Austria, Slovakia, the Czech Republic and Serbia following official inquiries.

In addition to poisoning cases, BirdLife Hungary helps detecting crimes against other wildlife as well. In several cases, Gábor Deák and his dogs found the carcasses of illegally shot animals, including Buzzards, Goshawks, ravens, wolves, and in one case, they searched for a wild cat killed during an illegal hunt.
The results so far show that the dog unit plays as essential role in detecting illegal poisonings against wildlife. It is thought that all these actions have helped to reduce poisoning incidents which were directly aﬀecting Eastern imperial eagles and that their population is starting to increase again after a few years of stagnation.