Death of "Desiree" revealed a huge poisoning site in Serbia 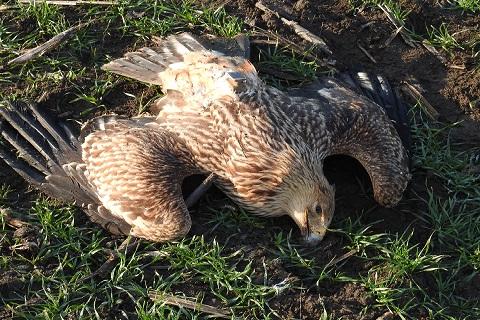 After contacting colleagues of PannonEagle project team from Serbia, last coordinates were forwarded and the team of Institute for Nature Conservation of Vojvodina Province and Bird Protection and Study Society of Serbia retrieved the bird with the logger from a field outside the village of Svilojevo, confirming unfortunately that the young eagle is dead. 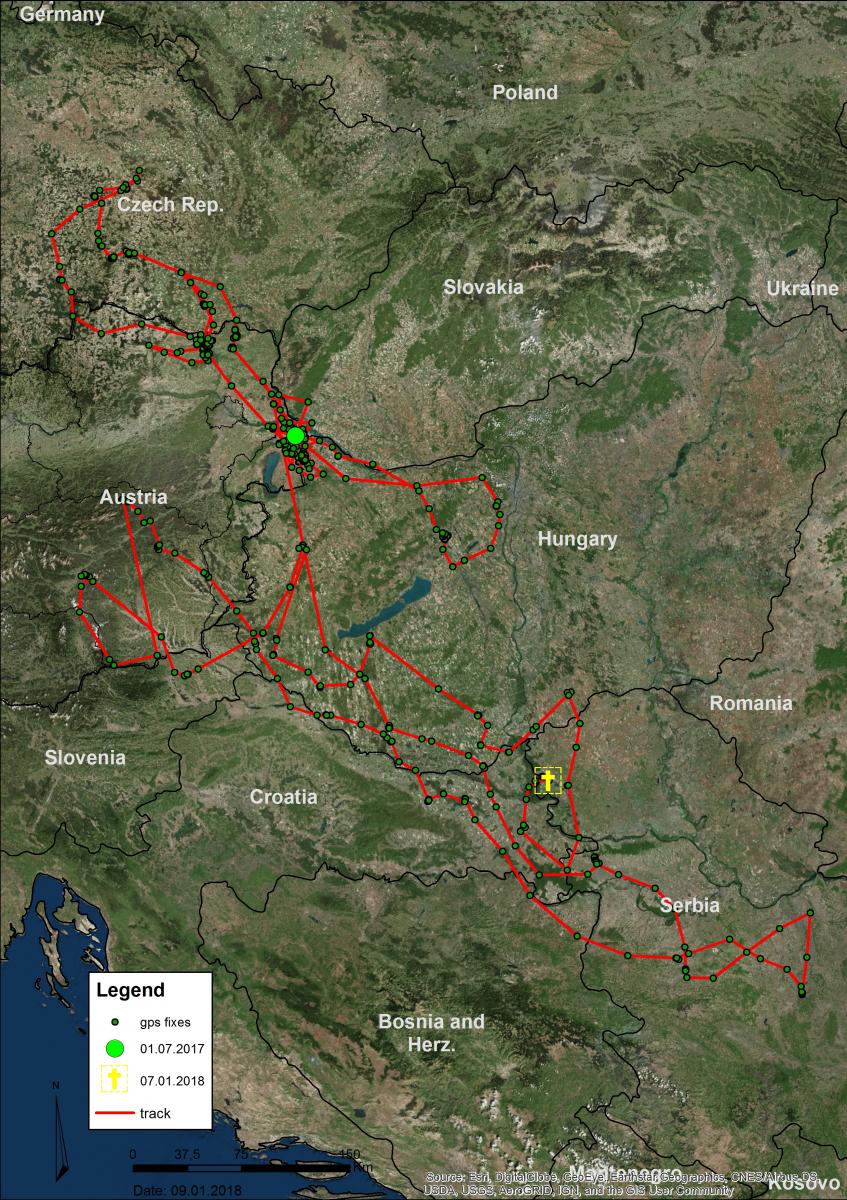 The route of "Desiree"

The surrounding area covered by meadows, hedges and arable land was searched, but only some fur remains were found near the carcass. Although no other dead animals or remnants of poisoned baits were discovered, there were signs on the carcass that indicate poisoning. Unfortunately, the suspicion of poisoning was backed up also by the fact that this area seems to be a hot-spot of poisoning as many cases of poisoning have been recorded around this village since 2014. Additionally, in the last ten days of December 2017 and first weeks on 2018 there has been an alarming number of new cases of placed poisoned baits discovered at different locations around North Serbia.

On 11.01.2018. the dog unit of the PannonEagle Project, i.e. Falco and Carlo, and their guides from MME/BirdLife Hungary came to Svilojevo to help the field search. BirdLife Hungary team with the dogs was joined in the field by the team of BPSSS, INCVP, Environmental Inspection of Province of Vojvodina, the ranger of Public Forest Management Company for “Vojvodinašume” and local police. In the immediate vicinity of the location of "Desiree's" carcass, only old remains of placed baits were found. With previous knowledge of the history of poisoning in this area, the search has been expanded. After arriving to the location closer to the village, the dogs were unfortunately extremely busy. Along one line of approximately 1 km, our team discovered carcasses and remnants of 5 Common Buzzards, 7 Golden Jackals, 2 Magpies, one Fox, and one feral dog. Scattered along this line were many baits in the form of sheep skins and intestines, as well as remains of poultry, all with clearly visible pinkish coloration that indicates the use of poison, i.e. that these animal remains were treated most likely with carbofuran (banned in the EU). 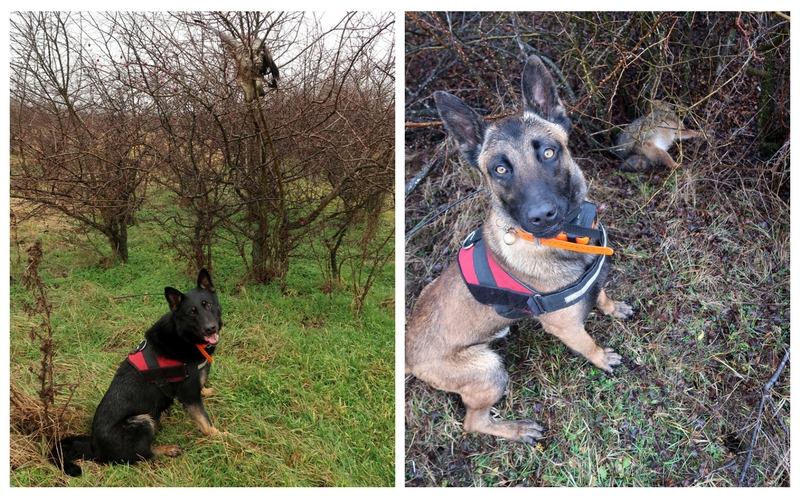 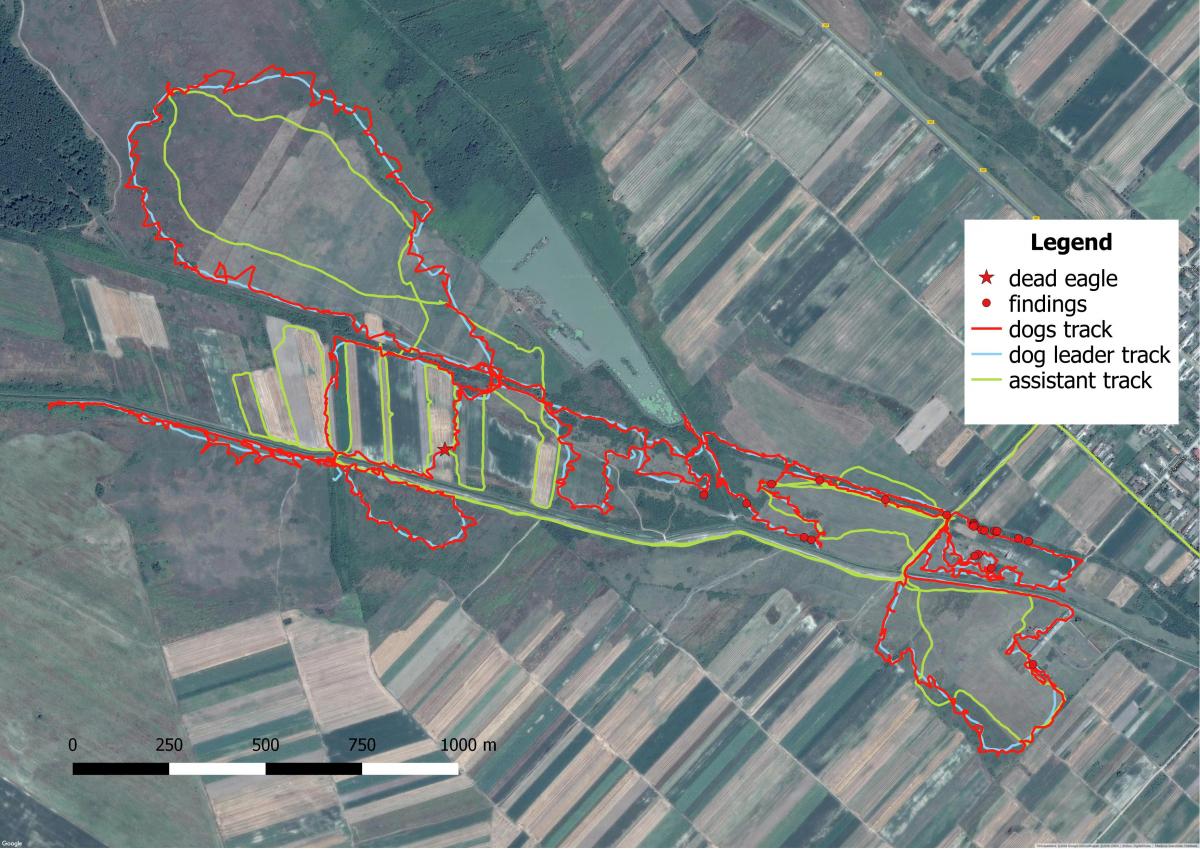 The dogs were fitted with transmitters so we can follow the route of the search party (Image: MME/BirdLife Hungary)

And this was not the end of the total damage inflicted in this case. On 14th of January at a location just few hundreds meters away, more casualties were discovered: two White-tailed eagles, one Common Buzzard, one Magpie, and two Golden Jackals. Among the total of 23 dead animals found in only five days. There were fresh carcasses but also very old remains which only confirms that this is a case of systematic poisoning that is occurring regularly in this village. 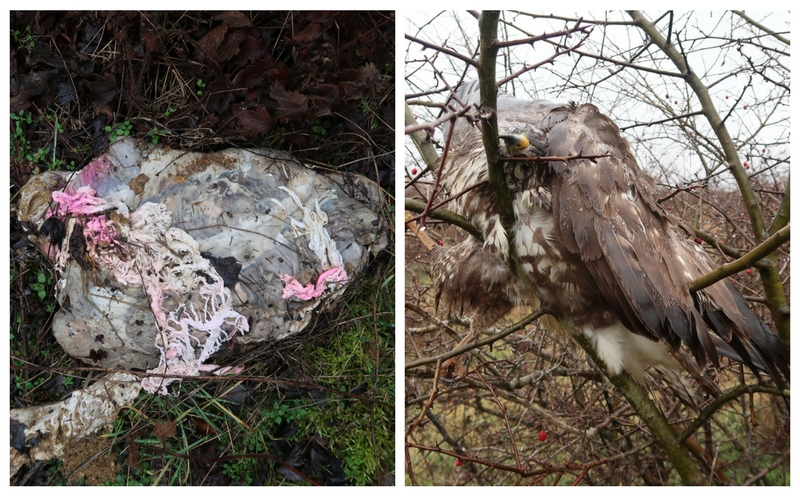 The area around the village features great surfaces of preserved pastures, many important habitat elements and an artificial raptor feeding site in the vicinity. This area, comprising Gornje Podunavlje Nature Reserve in Serbia and Kopački Rit Nature Park in Croatia (both IBAs and Ramsar sites), is the most important site for breeding and wintering White-tailed Eagles in the Danube Basin! Satellite tracking also provides evidence that significant number of Central European Imperial Eagles visit this place.

Population of Golden Jackals in this area is also one of highest in Serbia, creating significant conflict with humans. The management of Golden Jackal (and to some extent also Red Fox) is not based on scientific principles and includes massive shooting and, evidently, frequent poisoning. Local hunters and owners of grazing cattle seem to have an idea that poisoning of Golden Jackals is the cheapest and most efficient way of control of their population. Jackal hunters are even rewarded if they provide evidence that they killed jackals (they usually cut the tail and receive some 20 EUR as a reward from local authorities!). In this situation, they consider poisoning as the most efficient solution, furthermore, the carbofuran can easily be acquired on the black market, causing drastic and non-selective eradication of local wildlife.

The lack of sentences for previous wildlife poisoning cases in Serbia is the biggest obstacle that conservationist consider in dealing with widespread wildlife poisoning. The severity of this case, along with great media attention received for this one and previous cases happening in Serbia during this period, contributed to initiation of an investigation that seems to be more serious than the average process of dealing with these type of crimes before. Bird Protection and Study Society of Serbia and Institute for Nature Conservation of Vojvodina Province confirm that official charges have been made and that there are several persons considered as suspects for this crime. Achieving a sentence for the crime committed in this case, something that has so far never been achieved in Serbia, would mark a great precedent in the fight against wildlife poisoning. Alert that is being created in the public with all these cases will hopefully help put pressure on authorities to more seriously tackle this issue and adopt proper procedures that can help in bringing justice to the guilty parties and preventing such crime.