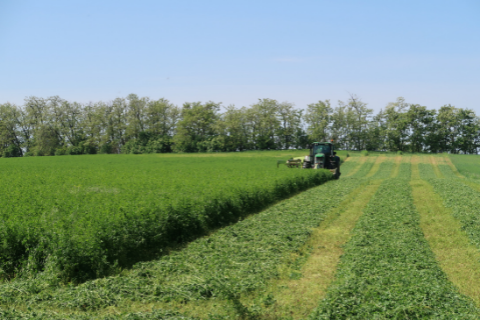 The poison and carcass detection dog unit of BirdLife Hungary has already proved its efficiency in the search for poisoned wild animals in the last seven years. However, the unit can also be deployed successfully for other conservation issues; for example detecting unintentional conservation damage by locating the carcasses of protected animals killed during agricultural mowing.

With the spread of industrial agriculture, the applied technologies became more advanced, the machines larger and more efficient, and at the same time the agricultural areas became a serious threat to wildlife. While in conventional farming the hay was harvested gradually over a longer period of time and nesting or resting animals had time and opportunity to escape from manual mowing. The chances of animals escaping the ever increasing speed and cutting width of modern mowing machines have extremely reduced.

When mowing starts on the roe deer's resting place

Grasslands and crop fileds provide not only feeding grounds, but also hiding and nesting grounds for many animal species, so agricultural operations during sensitive periods can pose a serious risk. The mitigation and prevention of damage caused by mowing is important from both nature conservation and game management point of you, as there are protected and highly protected species - birds, amphibians, reptiles - as well as domestically important small game species: hares, pheasants and deer, among the killed animals. Decomposing carcasses of mowed animals pose a health hazard to animals when mixed with roughage, so the interests of farmers coincide with the aspects of nature conservation and game management.

The exact rate of mowing mortality has not been studied so far, as the search for carcasses of smaller animals is a rather difficult task. Krisztián Katona and Zsolt Bíró, researchers from the University of Agricultural and Life Sciences (formerly Szent István University), together with the dog unit (Gábor Deák and Falco) monitored mowing mortality on a sample area in the Jászság region. Their results were reported in the renowned Czech scientific journal „Journal of Vertebrate Biology.”

Falco seeks and finds
The chosen area for the monitoring activity is a tipical agricultural landscape, where huge fields of crops are grown, with patches of pasture, scrub vegetation, and trees. Although Falco was trained to detect poisoned carcasses – he found almost 400 of them in the past 7 years – during this monitoring it became clear that the dog unit is successful in finding carcasses killed by mowing activities.

In the period of May-June 2018, Gábor Deák and Falco inspected a total of nearly 100 hectares, half of which were forage and half were meadows. Mowing in these areas was done during the day with a tractor and a 3 meter wide front-mounted disc and trailed mower attached to it. In the sample area studied, farmers rarely used game deterring equipment, as most of them did not think they were effective.

Falco found 149 animals that had fallen victim to mowing in the nearly 100-acre area studied. Based on the carcasses found, it can be concluded that, neither the type of vegetation nor the time of the search affected the findings. Although for more lizard carcassess were found on meadows.

The most affected vertebrate group in mowing mortality was reptiles, which accounted for 57% of all carcasses found. Within this, sand lizards (Lacerta agilis) were the most common, accounting for 91% of reptile carcasses, but grass snakes (Natrix natrix) were also found. 30% of the carcasses were mammals, most of them rodents, and 6% were birds. 11% of all carcasses were roe deer, but hares and pheasants were also found, indicating that mechanical mowing is not only a nature conservation issue but also causes damage to game management.

Farmers can do the most to tackle the problem directly, but it is important to get the right help: professional advice and financial compensation. In Natura 2000 grasslands, the use of bird-friendly mowing methods is required by law, such as mowing from „inside out”, rotational mowing and the use of flushing bars. The flushing bar is a device placed 4-5 meters in front of the mower that combs the crop across the full width of the cut and alarms hiding animals before the mower gets there. Stubble left at a height of at least 10 cm somewhat reduces the yield, however, studies have shown that it is a matter of life and death for the most affected reptiles and amphibians. Although low stubble increases the yield, the purity and value of hay decreases.

From a nature conservation point of view an important preventive measure could be the preliminary assessment of the areas to be mowed, detecting the nests of strictly  protected bird species - e.g. Great bustard or Montagu’s harrier. This is an extremely time consuming job that is usually done by field staff from national park directorates using a variety of methods. If an active nest is found, it can be protected by designating a protection zone. In recent years, attempts have been made to detect the nests by remote sensing and drone - the method is under development, but the first results - e.g. in the case of bustards-, are hopeful.

Destroyed nest of a pheasant and Falco, the dog, that found it (Photos: Gábor Deák).

In order to have a proper dialogue about the wildlife mortality by mowing, we would first need to have a realistic picture of the extent of the issue. During the study in Jászság, it became clear that the dog unit can also be effective in detecting wildlife mortality by mowing, thus contributing to the mitigation of this nature conservation and game management issue.