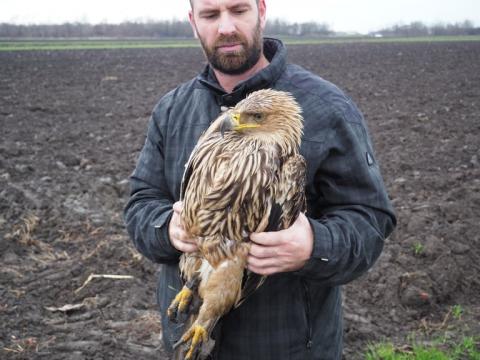 A young Eastern Imperial Eagle that was found exhausted on December 30, 2020, in the area of ​​the village of Prigrevica near Apatin, died a few days later in the shelter for wild animals of the "Palić" Zoo. The Bird Protcetion and Study Society of Serbia announced that the laboratory analysis determined that the cause of death was lead poisoning.

The young bird, who hatched in Slovakia in the spring of 2020, after leaving his parents' nest, embarked on an adventure that ended fatally for him. Until they reach full maturity, young eagles usually explore large areas, perfecting the skills they need to survive. Thus, during January and February this year, 13 young crusaders were recorded throughout Vojvodina and in the vicinity of Belgrade.

The unfortunate eagle was found in the field by hunters from Prigrevica, and they informed the ornithologist Nenad Spremo. Then, the Provincial Institute for Nature Conservation joined the rescue of a critically endangered Imperial Eagle in Serbia, and the bird was transferred to the "Palić" Zoo for examination and treatment. The eagle had a metal ring on its right leg which helped to find out the time and place where it was marked.

Despite the great work of veterinarians from Subotica, the eagle died at the beginning of January. X-rays showed that the bird had objects similar to lead shot inside its body. The autopsy and ecotoxicological analysis, on the basis of which the cause of death was determined, was performed by the Scientific Veterinary Institute "Novi Sad".

"The eagle was not shot, but it ate an animal that was killed with a shotgun and introduced lead pellets into the body through food. Eagles do not fret from feeding on corpses, so they are often victims of poisoning ", explains Milan Ružić, executive director of the Bird Protection and Study Society of Serbia.
The lead content in the liver tissue of the young bird was 5 times higher than the level that is deadly for large eagles, according to the test report signed by Dr. vet. med. Radomir Ratajac from the Scientific Veterinary Institute "Novi Sad".

The death of the eagle is the first proven case of lead poisoning of a wild bird in Serbia. In many countries, lead poisoning is a great threat to the survival of the living world, above all, birds. Scientists have estimated that every year in the European Union, more than a million wild birds suffer from the consequences of lead poisoning.

"Lead is a highly toxic metal that causes severe anemia and affects the nervous system, bloodstream, liver and kidneys. Lead poisoning causes lethargy, blindness, paralysis of the lungs and intestinal tract, attack and death, both in animals and humans", the Bird Protection and Study Society of Serbia states.
According to the research that ornithologists from BPSSS did in Serbia, about 5.5 tons of lead shot is fired into ponds, lakes and rivers every year. In this way, every year more than 20 million new lead pellets reach the environment, which endangers the public health and safety of citizens.

"For those of us who work on the protection of the Eastern Imperial Eagles, the news of the loss of each individual is a big blow. It is a devastating fact to know that a critically endangered bird, which adorns national symbols, suffers due to poisoning ", said Maksim Karanović from the Society for the Protection and Study of Birds of Serbia.

In order to solve the problem of poisoning wild animals and other problems that cause the suffering of birds in Serbia, the Bird Protection and Study Society of Serbia launched the portal poslednjilet.rs. With the help of the portal, citizens can get acquainted with the most common causes of bird mortality, such as poisoning, poaching, illegal capture, electrocution and collision. In addition to browsing informations, citizens will be able to report cases of bird killing through the portal.

"If we get timely data on the illegal killing or woudning of birds, it will show us the scale of the problem, and then help in finding, reporting and sanctioning the perpetrators," says Karanović, and adds: "We need the help of conscientious citizens who will submit information on endangering birds via the portal poslednjilet.rs ”.