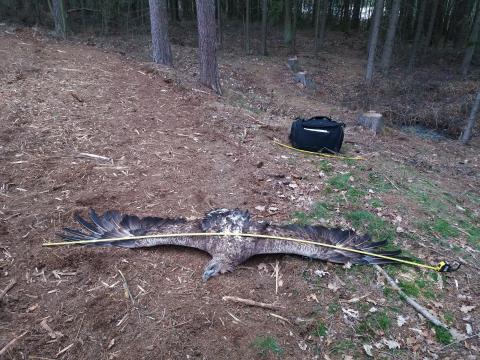 Two White-tailed eagle chicks were killed in the South Bohemia when someone cut down the tree with their nest. „The chicks could not fly yet and were killed when the tree hit the ground. The police investigates this case,,“ said the dog handler Klára Hlubocká.

As the largest bird of prey living in the Czech Republic, the White-tailed eagle does not have a natural enemy in nature, only a man threatens it. The poachers use a brutal way of killing - the nerve poison carbofuran, after which the animal dies painfully. “From the beginning of January to the end of April, the number of killed White-tailed eagles is twelve. Nine of them were killed by carbofuran, which has been banned throughout the European union since 2008, ”notes Hlubocká, who searches for poisoned baits and their victims with dogs Sam and Victory.