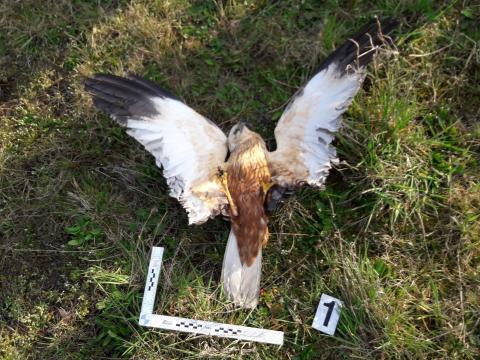 Three poisoned marsh harriers were found in Czechia in Kolín District. Two females and a male were probably poisoned by forbidden poison carbofuran. Cadavers have been taken over by the criminal police which currently works on investigating cases. This year the police has taken over 20 cases of poisoned animals from Czech Society for ornithology so far. Since 2017 it's been 94 cases that the police took over from CSO.

„On Monday 19th April we received a call that a dead female marsh harrier was found, very likely poisoned. Before police or CSO arrived, somebody took the cadaver away. On Tuesday we found on the location another two dead marsh harriers - male and female, both adults. They were in a position typical for poisoning - spasmodically spread wings and clenched claws. We also found a dead raven," says dog handler Klára Hlubocká, who is looking for poisoned baits and their victims with a specially trained Chesapeake Bay retriever Victory.