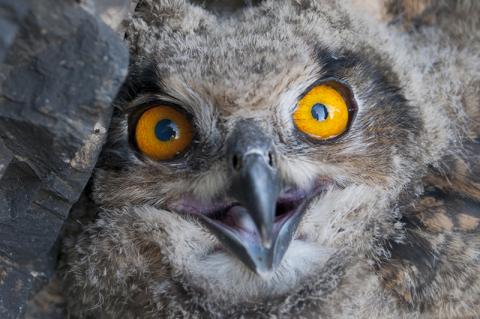 Vienna, Frauendorf an der Schmida (NÖ), 08.05.2019 – The day before yesterday an observant bird admirer notified the bird conservation organisation BirdLife Austria about a horrific discovery. Three five-week-old Eagle Owl chicks were brutally killed: with blood stained feathers, severe bruising and blood clots around their beaks they were hastily buried not far from their place of hatching. The police have been notified and are currently investigating this case.

“Who would want to kill these five-week-old owls and why?”, asked the observant bird admirer and discoverer of this brutal act, who wishes to remain anonymous due to local circumstances. “The offender is exceptionally brutal and felt confident in carrying out this act”, said Matthias Schmidt from BirdLife Austria, “as the young owls were buried very close to their nest.” The birdwatcher had been regularly visiting the Eagle Owl female and, later on, the young owls and observing them since a few weeks. That the young were no longer in their nest the bird admirer discovered on Monday. The resulting search for them ended in this horrendous discovery. After only hatching five weeks ago their lives were brutally ended. The police have been notified and this incident is now under investigation.

BirdLife Austria requests all animal lovers and observant walkers to report any dead or injured Raptors. For this purpose, it can be reported on the Platform www.kaiseradler.at and on the APP birdcrime. Suspicious cases can also be reported under the telephone number 0660/869 23 27.

The Eagle Owl is the largest owl species in the world. It has a brown-black breast area and a slightly darker back. They can grow to anywhere between 60 to 75cm, with a wing span of 160 to 188cm. The beak ranges from dark brown to black. The characteristic territorial song of males is a muffled “u-hu” which can be heard between from late December to March and in October. The females normally incubate their eggs from March to April and after around 30 days the young hatch. Eagle Owls play, as top predators, an important role in the ecosystem.