Second bird of prey poisoner was convicted in Czechia 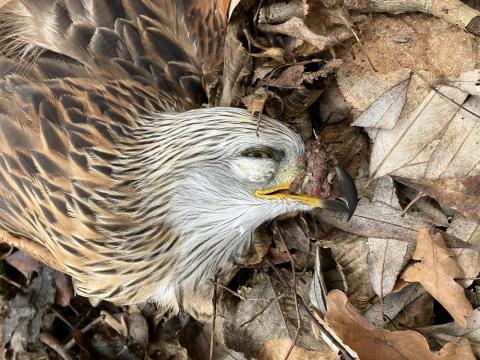 Second bird of prey poisoner was convicted in Czechia. The man was given suspended sentence - 3 years of imprisonment with a delay of 3 years.

73 years old man (pigeon and polutry breeder and hunter) has been poisoning animals with chicken eggs and dead pigeons impregnated with highly poisonous carbofuran. Near his house in Milovice in the Břeclav region he placed the baits in a grassy public area next to a forest path that is often used by local residents for walks and dog walks. "His first victim found in April 2021. It was a red kite equipped with a GPS-GSM logger, which signaled that the kite had not moved from its place for some time. Subsequently, not far from the red kite, there were found remains of another red kite, two dead foxes and the remains of a pigeon as bait. The police have taken over the case," informs CSO dog-leader Klára Hlubocká, who is a specialist in searching for poisoned baits and their animal victims.

In the following weeks and months, more poisoned animals began to appear in the area. For investigators an elderly hunter and breeder of pigeons and poultry appeared to be the most likely perpetrator. "At the end of May 2022, at the request of criminal investigators, we assisted in a house search of the suspect. We found a container with carbofuran, syringes and a tray of eggs into which the man injected the poison," Hlubocká described.

The man was charged with three crimes – misappropriation of wild animals, possession of narcotics and psychotropic substances and poison and cruelty to animals.. He faced up to six years in prison for this. On October 13, 2022, the judge of the District Court in Břeclav sentenced him to three years suspended for three years. The judgement states that the man "caused the death of two red kites, two red foxes and three beech martens in a manner causing disproportionate pain and suffering".

In the Czech Republic, two bird of prey poisoners have been convicted so far. Both sentences were suspended. The first was a fish farmer, who in 2021 was sentenced by the court to a 2.5-year suspended sentence of 3.5 years for poisoning two white-taled eagles and two ravens with carbofuran near Mečichov in 2019. This man did not confess to the crime.

The poisoning of wild animals is a huge problem in the Czech Republic. Since 2017, when the field dog unit has started to act, the CSO has documented and handed over 115 cases to the police, in which 526 animals became victims. Poisoners mostly use the poison carbofuran, the possession of which has been banned in the entire European Union since 2008 due to excessive toxicity, it was previously used as a pesticide. Carbofuran is lethal even in small doses, even to humans.