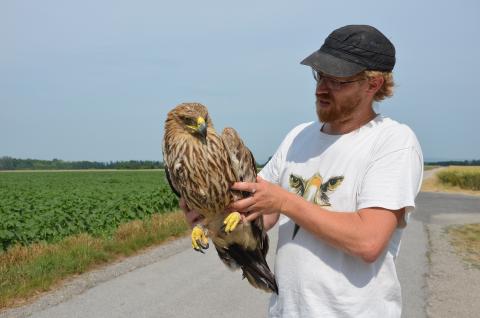 Until recently, “Alois” counted as a classic example for the protection of big raptors. After a bacterial infection it was captured in May 2019 and brought to the EGS rehabilitation center in Haringsee, Lower Austria. By June “Alois” was healthy enough to be released into the wild. Therefore, BirdLife Austria fitted the bird with a satellite tag to monitor the rehabilitation success. “It is always a great pleasure to release a bird back into the wild and give it a second chance!”, project leader Matthias Schmidt told us back then.
Despite its difficult background, “Alois” managed not only to survive. It stayed perfectly healthy and undertook long flights throughout the Carpathian basin, leading as far as southern Hungary. Within approximately eight months it covered over 16,000 km. The data obtained by the logger gave highly interesting insights in the spatial use and behaviour of the bird. However, “Alois” life ended on the 19th March 2020, when it was shot from the sky at 08.30 a.m. between Oberriethal and Fernreith. The offender threw the satellite tag into the river Traun shortly afterwards. The detailed data from the different measuring instruments helped to reconstruct the progression of events.
The loss of a bird capable of reproduction deteriorates the conservations status of Imperial Eagles in Austria and also saddens our team members deeply. We hope for successful police investigations and relevant information on the culprit from the public. If you can help us, we pledge you to get in touch with us via the reporting form on this website or by phone on +43 660/869 23 27