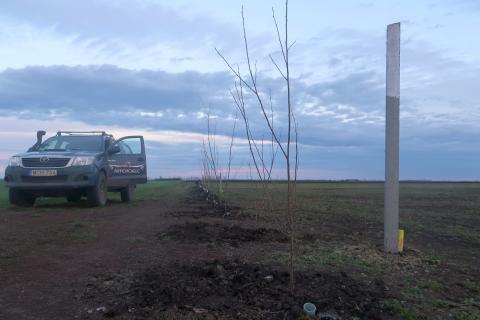 In the spring and autumn we are keeping busy with habitat restoration work within the framework of the PannonEagle LIFE programme.

Before commencing the work, a geodesist marked the borders of the dirt roads, therefore, no land would fall on privately owned ploughland or grassland. The hired forestry contractor had already planted 520 trees of the planned 1500 including Grey Poplar, Common Ash, European Oak and Field Elm. The primary aim of the afforestation is to provide nest-site for Eastern Imperial Eagle in the long run. Meanwhile, the management of tree alleys being in bad condition has been carried out reaching altogether 3.6 kilometres in length.

These afforestation sites in the centre and northern part of the Jászság SPA are linked to those farms purchased during the former HELICON LIFE programme.

Besides to tree planting, 9000 Blackthorn and Common Hawthorn bushes will be planted as well to create bushy biotope providing prime habitat for songbirds and small game species.

In addition to the above, we had created habitats, what we call “hare-grazing pastures”, on 5000 m2 land which means that we sowed formerly ploughed dirt roads using the seed mix of leguminous and grass species. This is necessary in order to establish habitats for Common Hare, the population of which has reduced drastically due to the intensification of agricultural practices. At the same time, the crop structure has changed and the acreage of succulent feeds, such as sugar beet, has shrunk a great deal which provided food and shelter for the species. However, a number of other causes altogether led to the drastic decline of Common Hare. As a result hunting clubs have suffered a serious fall of income while eagles have lost a great portion of their important food source.

Using mosaic mowing we would like to create a mixture of old and fresh grass strips which provide better living conditions for hares and pheasants. The old grass provides an excellent haven for both species while the mowed fresh strips offer good foraging habitats for them. This kind of land practice concerned 5.4 hectares of land.