Further poisoning incident in the greater area of Zistersdorf 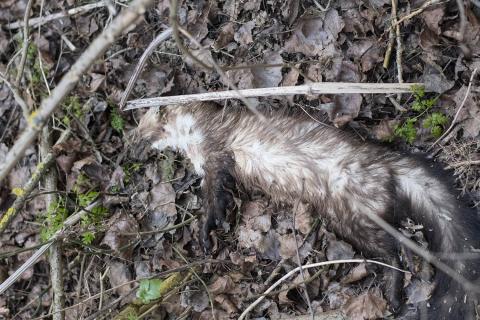 The series of illegal attacks on birds of prey around Zistersdorf (Lower Austria) has still not ended. After passers-by reported a number of dead animals in February, the results of the investigation are now in: one strictly protected Marsh Harrier and a house cat were shot, one stone marten was poisoned.

“It is simply unbelievable how brazenly birds of prey and other animals are killed here,” says Matthias Schmidt of bird conservation organisation BirdLife Austria. The area around Zistersdorf in Lower Austria continues to be a hotspot for illegal raptor persecution. In no other region in Austria have more poisoned baits or poisoned birds of prey been discovered. Since the beginning of 2016, more than 30 birds are proven victims of illegal persecution and a further dozen other animals died or disappeared under mysterious circumstances. Most of them were poisoned with the pesticide Carbuforan, which has already been outlawed for many years. Schmidt continues, “Despite reports to the police, investigations, and educational work, the murdering of strictly protected animals has merrily continued. And the discoveries are mostly coincidental – either reported by attentive passers-by or committed nature observers. The number of unreported cases is probably many times higher!”

Intensification of efforts urgently needed
The problem of illegal raptor persecution through humans has been pointed out by BirdLife Austria, WWF Austria, and other organisations for years. “There have been repeated talks with conservation and hunting authorities as well as with political representatives, but all measures taken so far have unfortunately proven to be ineffective,” Schmidt criticizes. “Local hunting supervisory bodies mostly pretend to know of nothing, and their willingness to cooperate is often low. Based on past experience, we must unfortunately assume that the perpetrators come from within the hunters’ own ranks.”

Independent supervisory bodies demanded
The past has shown that the current hunting supervisory system is often not suitable in problem areas such as this one. “The inhibition threshold to provide information about illegally killed birds of prey is still very high,” argues Christina Wolf-Petre of WWF. “Independent controlling is therefore urgently needed, for example through authorised conservation guards or an external, superordinate hunting oversight body. The legal options are on the table, now they must be implemented!” On top of this, BirdLife Austria and WWF recommend applying innovative investigative methods, such as the use of anti-poison dogs. This method is already established in many neighbouring countries and has proven highly successful. “Within the framework of our PannonEagle LIFE project, we are able to call in anti-poison dogs and thereby support police investigations,” Christina Wolf-Petre explains. “These dogs are able to find even the smallest amounts of poison, thereby preventing further victims.”

New means of combating raptor persecution
“Regardless of which group the perpetrators belong to, it is high time to put a stop to their game”, Thomas Hansmann, head of the Lower Austrian environmental advocacy office, demands. “New, more effective means must be used to ensure conformity with the laws. An external hunting oversight system is indispensable and must be implemented as soon as possible!”