For the first time ever, two Eastern Imperial Eagle chicks tagged with satellite transmitters in Serbia

Mima and Mihajlo, the Eastern Imperial Eagle chicks from Serbia will be monitored for the first time with the help of satellite transmitters, the technology that will enable ornithologists from the Bird Protection and Study Society of Serbia to monitor the movement of the birds in real time, which can ensure the survival of this species.

With only 3 nesting pairs, the Eastern Imperial Eagle is the rarest bird of prey in Serbia. In the Red Book of Birds of Serbia, they were given the category of critically endangered species due to the extremely low abundance and great dangers that threaten their survival in nature.

Imperial Eagles nest in the very north of Vojvodina's Banat, in the steppe landscapes and arable land. Our small national population is a part of a larger Pannonian population, numbering hundreds of pairs in Hungary, Slovakia, Austria and the Czech Republic. 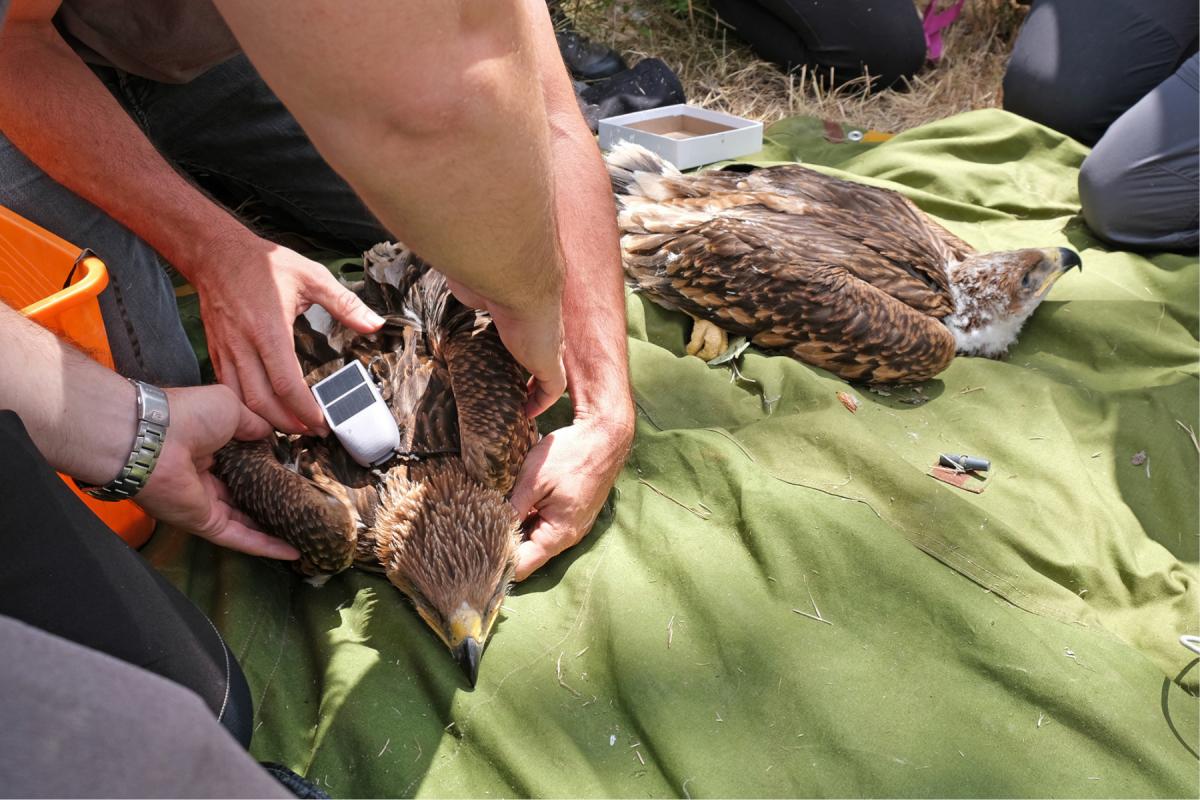 Tagging and ringing of the male pair of EIE in Serbia (Photo: Kalman Moldvai)

All three nests are supervised by volunteers of the Bird Protection and Study Society of Serbia, a gamekeeper from Srpski Krstur and the protected area guards from the Special Nature Reserve "Great Bustard Pastures". Guarding the nest, as in previous years, contributed to the eagles nesting safely and successfully.

This year, the offspring of the Eastern Imperial Eagles in Serbia consists of four chicks, two males and two females. The females are named Mima and Zlatica, and the males Mihajlo and Gavrilo. 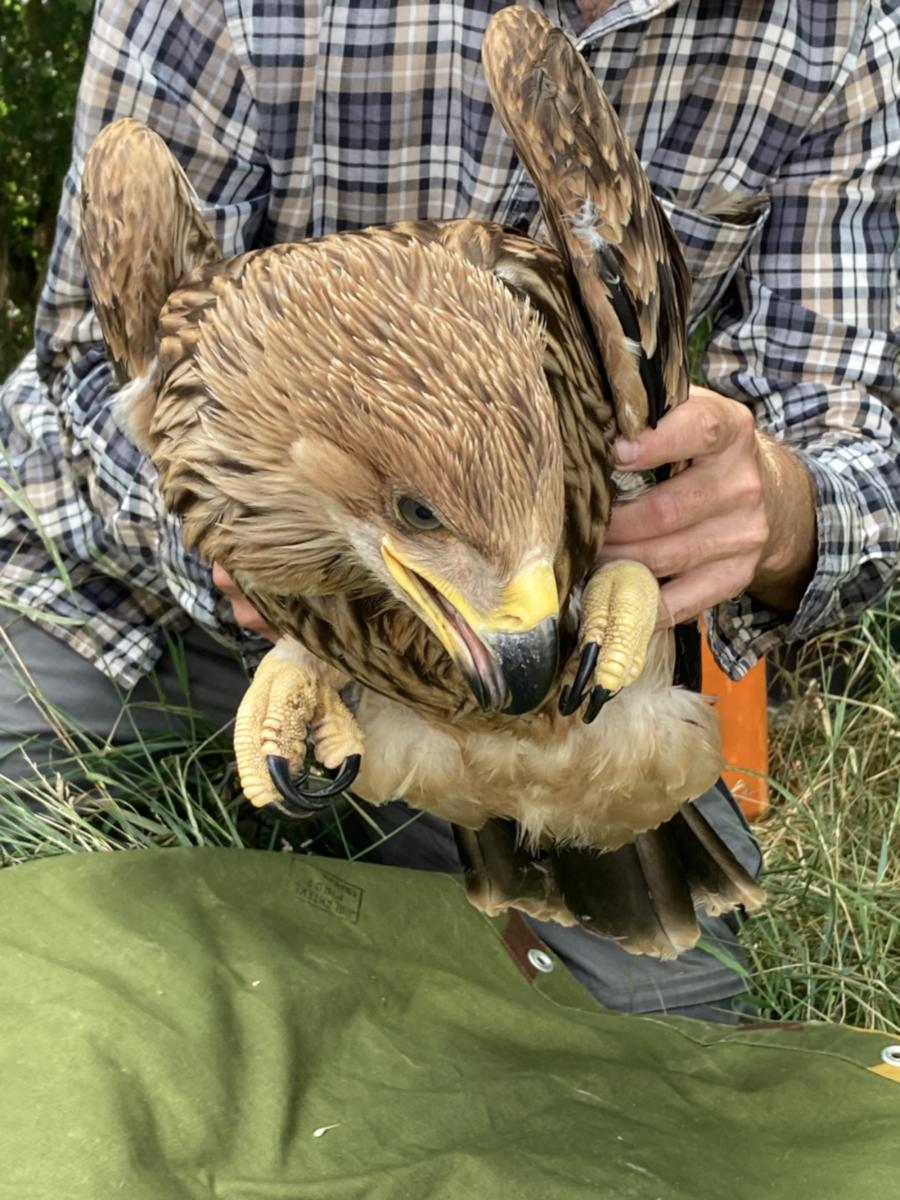 Mima, the oldest of the chicks (Photo: Maksim Karanović)

On Friday, July 2, a team of ornithologists from the Bird Protection and Study Society of Serbia, together with the colleagues from the Hungarian Ornithological and Nature Conservation Society (MME - BirdLife Hungary), the Institute for Nature Conservation of Vojvodina Province, and great help from the professional climbers, made a visit to the eagle’s nests, all thanks to the PannonEagle LIFE project partnership. 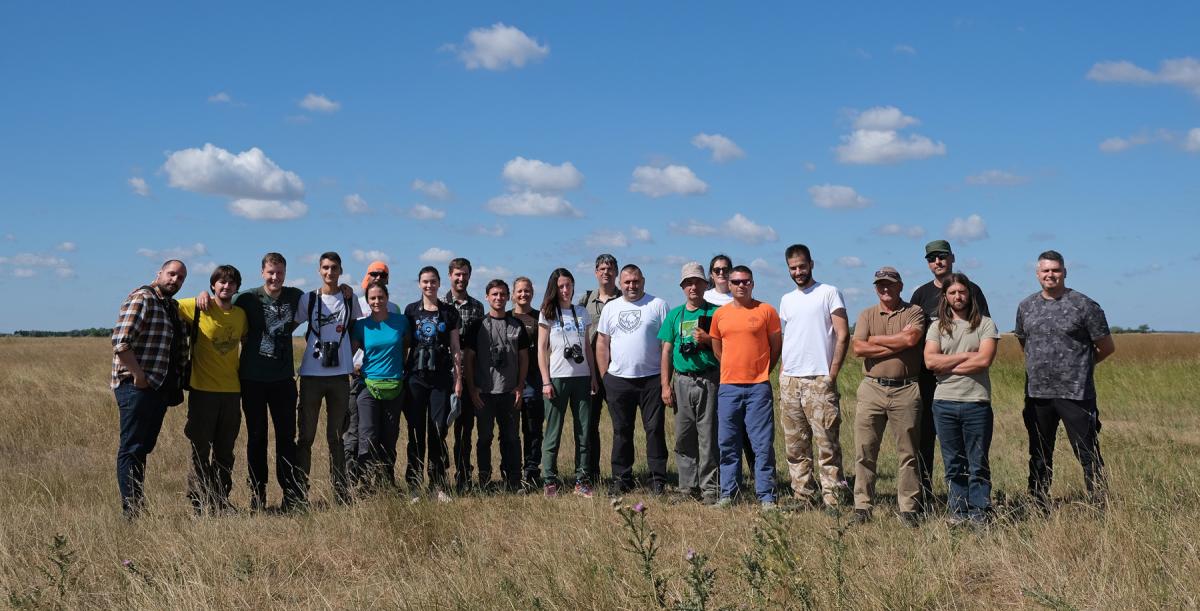 All the chicks were marked with metal and plastic rings, and two were equipped with satellite transmitters that will help researchers track them, find out where they fly, hunt, and come to their aid if necessary.

"For our eagles, the greatest threats are poisoning and the lack of trees on which to nest. This spring, we noticed several cases of bird poisoning in the north of Banat, and luckily the eagles did not get affected. Irresponsible use of pesticides and the increasingly frequent deliberate poisoning of foxes, jackals, dogs and other carnivores must be stopped urgently in order to save the birds, which adorn our national coat of arms," ​​said Milan Ružić, Executive Director of the Bird Protection and Study Society of Serbia.