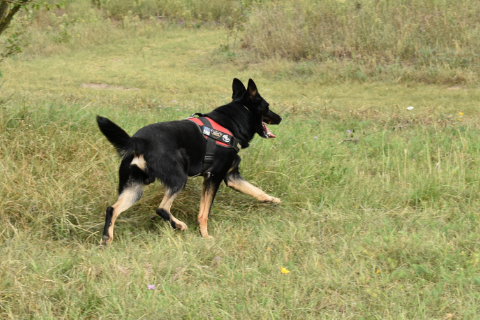 In January a dead white-tailed eagle was found by a jogger in Lower Austria. The female was found on a freight road. The dead animal was lying on the ground without any indication of a natural cause of death. A complaint was filed and the bird was sent to the laboratory for examination. The analysis proofed poisoning by Carbofuran.

Anonymous clues finally led to the police carrying out a house search on a suspicious person. For this search a Carbofuran search dog was approved by the public prosecutorWithin the framework of the PannonEagle project, WWF and BirdLife Austria were able to establish contact with the appropriately trained dog called “Falco” from MME in Hungary and to coordinate the communication between the dog handler and the investigating police officers.  At the end of August it was time for the first house search with a Carbofuran search dog in Austria! In addition to poison some dead animals were also seized. Again the analysis of the cadavers showed a Carbofuran poisoning, among them an eagle owl. Subsequently, in coordination with the public prosecutor's office and accompanied by the police, the hunting area was successfully searched by dogs specially trained for the search for cadavers - so-called nature protection dogs. The training of the dogs used here was financed by BirdLife Austria.

The public prosecutor's office is currently investigating whether charges are being brought against "intentional damage to the animal or plant population”. The suspect has already been deprived of his control function in the hunting area. The withdrawal of the hunting permit is currently being examined. Now one must wait for the outcome of the court hearing.

Concerted forces have led to an investigation success! For Austria, this is an important milestone in the fight against illegal killing of raptors!