Farmers' forum at the Eagle Center 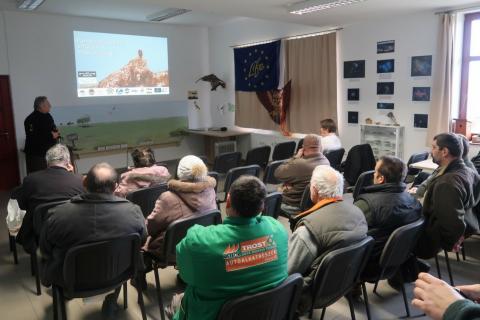 08.12.2017.
An information forum was held for farmers at the Eagle Center on the 6th of December, jointly organized by the Hortobágy National Park Directorate and the MME/BirdLife Hungary. Nearby farmers and hunters were invited to listen and to discuss the habitat management plans that will be undertaken by the two organizations in the scope of the PannonEagle LIFE program.

The attendees were first presented with a short lecture about the efforts and achievements of Imperial Eagle protection in Hungary, and MME's staff explained in detail the planned habitat developments. The local representatives of the concerned municipalities had given their vote of approval earlier, as the changes affect lands owned by municipalities, mainly dirt roads and ditches. Official permission has been obtained from the governmental authority.

According to the plans, native trees and bushes will be planted on the edge of the ditches starting from next autumn. The mosaic mowing of dirt roads will begin from the end of next spring. Thus, these little improved habitat patches will serve the reproduction and survival of the local small game population. It has also been outlined how the follow-up monitoring of this habitat management will take place.

The staff of the Hortobágy National Park Directorate presented the interventions planned in the area of ​​Borsóhalma. This location is state-owned and rented to farmers. Here, with the construction of sluices, it will significantly improve the water availability of the habitat. Invasive tree species will be also replaced by native tree species.

The success of the planned habitat management depends largely on the cooperation by local farmers and hunters. The forum helps to ensure that the affected land users won’t be surprised by the subcontractors performing habitat development work beside their land. We are confident to find long-term partnership with the local farmer community through an effective communication of the goals of our nature conservation measures.