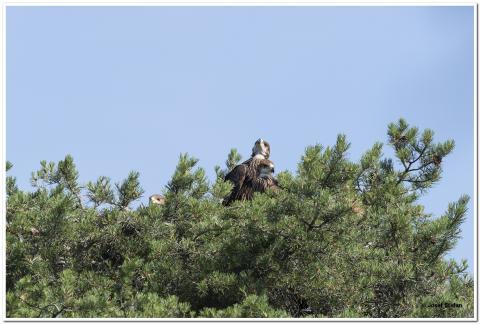 03.10.2017
It is an astounding and extremely rare success story of young Imperial Eagles who crashed to the ground with their parents’ eyrie in early June in the district of Neusiedl am See in Burgenland.

Thanks to the tireless efforts of raptor experts from BirdLife Austria and the owl and raptor station Haringsee run by Four Paws, as well as good cooperation the hunting association and authorities, two of the three Imperial Eagles have recovered and could be released into the wild.

A look back
At the beginning of June, an Imperial Eagle eyrie crashed to the ground in the district of Neusiedl am See in Burgenland, most likely due to a storm. Thanks to the Imperial Eagle species conservation programme of BirdLife Austria, the crash was quickly discovered and staff were able to find three young birds under the eyrie tree – fortunately still alive. Together with experts from the owl and raptor station Haringsee and local hunting representatives, the three birds were recovered and examined. Two of the three Imperial Eagles were injured and had to be taken to Haringsee for further medical treatment. The third young Imperial Eagle was completely unharmed by the fall – his name: “Eagnatz”.

Eagnatz’ success story
“Eagnatz was very fortunate to have survived the fall without any injuries,” reports Matthias Schmidt of BirdLife Austria.“ Together with our colleagues from the owl and raptor station Haringsee, we constructed an artificial eyrie in the same tree out of which the parents’ eyrie had fallen.” The plan was to leave Eagnatz in his natural environment, in the hope that the adult birds would continue to care for him. To keep the wild bird’s imprinting on humans to a minimum, Eagnatz was fed via a feeding lift. “Those were two intense weeks, supplying Eagnatz with food!”, says Schmidt. But the Imperial Eagle parents didn’t return, and Eagnatz temporarily followed his siblings to Haringsee. “Due to the small number of Imperial Eagle broods in Austria, it wasn’t easy to find another suitable eyrie to which we could relocate Eagnatz as a ‘foster child’”, says Schmidt. But on 1 July, and thanks to the open-mindedness of the responsible hunting coordinator, we were able to find a suitable place for the nearly fledged young Imperial Eagle in a Lower Austrian Imperial Eagle eyrie. Eagnatz was fitted with a satellite-GPS transmitter and the eyrie was put under intense observation. The young Imperial Eagle was integrated into his “new” family, fledged the nest, and left the step-parents’ territory at the end of August, headed for the northern Weinviertel and the Czech Republic. “Eagnatz is free and doing well,” says Schmidt, relieved. “We were able to prevent erroneous imprinting and consequently a lifetime in captivity!” A true success story!

Eagnatz’ siblings
Meanwhile, the two Imperial Eagle siblings were cared for in Haringsee and treated at the University of Veterinary Medicine, Vienna. As part of the EU-funded project LIFE15/NAT/HU/000902, which is supported financially by the Federal Ministry of Sustainability and Tourism and aims to protect Imperial Eagles in the Pannonian region, both birds will be brought to the eagle centre Sasközpont in Jászberény (Hungary) in the coming weeks. “Unfortunately, one of the Imperial Eagles will never be able to fly again due to his injuries, and will become a permanent fosterling. But the other has recovered very well and will soon also be able to be released into the wild!”, says Schmidt, delighted. “All of this would not have been possible without the excellent cooperation with our colleagues from the owl and raptor station Haringsee, the local hunters and the responsible authorities!”, Matthias Schmidt adds, gratefully. He emphasises, “Illegal persecution through humans is the main cause of death in Imperial Eagles. This cannot continue! That is why it was so important to take countermeasures in this case. Our conservation measures have enabled two Imperial Eagle’s a life in freedom!”