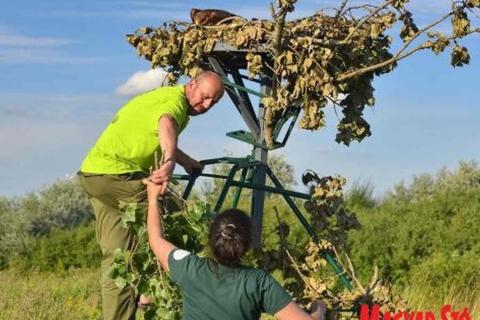 First program of guarding the Imperial Eagle nest in Serbia has been successfully completed under the organization of Bird Protection and Study Society of Serbia within the PannonEagle project.

Our only pair has two young ones and yesterday they flew out of the nest! This nest from which they have started their first flight is however not the one in which they hatched!

After almost four months of constant supervision and preventing many disturbances, while we were anxiously waiting for that final outcome of our efforts and the day when our eaglets will dare to fly, something unimaginable happened. Due to a severe storm in the night of 22nd of June, the Canadian poplar tree with the eagle nest had given under strong wind and heavy rainfall and came crushing down. Our young eagles Dusko and Lilika, in their 9th week, still incapable to fly out, fell down with it. In this unbelievable turn of events, both eaglets managed to survive the fall! A large treetop and a pile of broken branches may have prevented predators from reaching them but that was also keeping them out of sight and reach of their parents.

Fortunately PannonEagle guards were at the site, ready to react! Anita Sucic and project manager for BPSSS Milica Miskovic were there that day and have managed to find the completely still eaglets in their fallen nest. Soon a local gamekeeper Radenko Cvejanov and veterinarian from Novi Knezevac Atila Agoston came to help, and an extraordinary fast organization and reaction followed. After the birds were pulled out from underneath the branches and examined by the veterinarian to find no greater injuries, we knew that their best chance is to return them to their parents as soon as possible. Unfortunately, they were not both completely unharmed as Lilika has last one claw, but for the most they both seemed to be in good condition considering. Consultations with experts and Institute for Nature Conservation of Vojvodina Province have encouraged us to stay on course with the plan to return the birds on site. We managed to organize ourselves really quickly and the solution was a platform build for storks that was placed on a mobile hunter’s watchtower, and this was stationed on the site of the previous nest. The stork nest was built up some more with the branches from the fallen poplar tree so that we could make it more adequate for the eagles. After they have received some lunch and their rings, the young birds were placed on the new nest. We stepped back far enough to allow space for the parents to come back but kept an alert eye on them continuously observing the situation since that moment on. Firstly it was important to see how the young birds would behave in this new nest, but then also if we will spot the adults nearby. The moment we saw the mother coming down to them with pray, we could rest a little more easy knowing that the family has been reunited! However, due to the easy access of their new home we still worried about possible intrusions and even theft, so we tried to keep the news to ourselves and not let the word spread. Our guards were on site day and night, monitoring their progress and preventing any disturbances. Every day we grew more confident in their future while observing their flight practice and regular visits from the adults. Finally, the day came to say goodbye. Around 11 o’clock our brave boy dared to fly first and has successfully left the nest. The girl did not stay behind long, as only a few hours later she took her first flight too.

Since March 1st 2017, we’ve been monitoring the only remaining Imperial Eagle pair in Serbia, at the Special Nature Reserve “Pastures of the Great Bustard”. Our task was to watch the birds and note their behaviour, but primarily to enable an undisturbed incubation and rearing of the young. This was achieved through preventing and managing human activities within a 1km circle around the nest. The almost dissasterous fall of the tree was an unexpected challenge but in this case the clearest example of the significance that the guarding program has had! We are very thankful to all of the guards who participated from day 1. All of us together demonstrated how it is possible to contribute to an endangered species conservation in a very direct way, well done to everyone! This expereince was especially relevent as it is not only the first Imperial eagle nest guarding attempt, but it is in fact the first nest guarding program ever to be conducted in Serbia. During all four months of the guarding program and especially in the rescue operation, local gamekeeper Radenko Cvejanov provided significant help so we give him our gratitude and sincere congratulations on excellent management of the site. Additionaly we are very greatfull to have had such a great veterinarian and expert ornithologist Atila Agoston nearby in a crucial moment. Special thanks goes to the Association for the Protection of Great Bustard, an organization which works with great devotion in the Reserve, so they offered great logistical and personal assistance in this activity too!

Now it is time for us to say goodbye to our guarding post, at least until next year. We will continue to survey the location in the following period and hopefully enjoy the sight of our little heroes flying around!