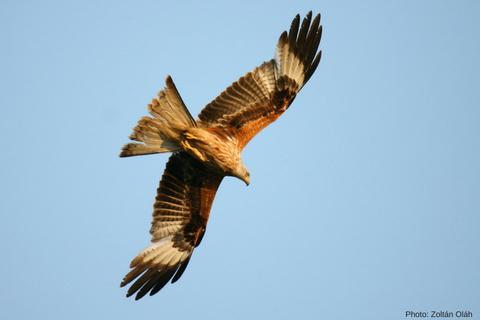 22.06.2017
In early May, wild animals were attacked with poison in Stroheim (Eferding district, Upper Austria). A number of poisoned rabbits’ heads and poisoned chicken eggs were positioned at the edge of a gravel pit. One Red Kite died. The investigation’s result now shows that the pesticide carbuforan was used.

“We have now received the sad findings of the Stroheim poisoning case,” reports Matthias Schmidt, raptor persecution expert at BirdLife Austria. The Research Institute of Wildlife Ecology and the Toxicology Institute of the Ludwig-Maximilian University detected the pesticide carbuforan in prepared rabbits’ heads and chicken eggs, which had led to the poisoning of at least one Red Kite and one Carrion Crow. Schmidt continues, “It is likely that there are further undiscovered victims. Although carbuforan is highly toxic, animals can still cover a considerable distance if they only ingest a smaller dose. These animals suffer a painful death over many hours.” The bureau for environmental crime has been notified.

Cooperation with authorities and hunters
Matthias Schmidt of BirdLife Austria and Christian Pichler of WWF emphasise that there is one good thing to report: “The relevant authorities are taking this matter seriously. We are hopeful that the case will be processed with the according intensity. It is important that the authorities and the provincial hunting association now also take further preventative measures to stop illegal raptor persecution.” Sepp Brandmayr, head of the provincial hunting association, makes clear, “Poison has no place in hunting whatsoever. It is strictly forbidden and is rejected by the provincial hunting association in all cases. Now we have to determine who brought out these poisoned baits. If it should prove to have been a hunter, that person will have to reckon with every consequence possible. There is no apology whatsoever for cases like this!”

Difficult return of already eradicated raptor
The bird discovered killed in this case – a Red Kite – is one of the most threatened raptor species in Austria. The Red Kite went extinct as a breeding species in Upper Austria at the end of the 19th century, and has been returning with a few pairs since 2010. Now having reached a maximum of ten breeding pairs, the Upper Austrian population is still extremely sensitive. For this reason, BirdLife Austria has been conducting a population survey and species conservation project in cooperation with the conservation department of the province of Upper Austria. Furthermore, WWF and BirdLife Austria are also campaigning against illegal raptor persecution through humans internationally, within the framework of the PannonEagle LIFE project (LIFE15/NAT/HU/000902). Illegal persecution through humans continues to be the leading threat in Central Europe for rare raptor species such as the Imperial Eagle. The EU-funded project is supported financially by the Federal Ministry of Sustainability and Tourism.

Cooperation of the general public indispensable
“This case of poisoning in Stroheim illustrates once again that we are heavily dependent on reports from the general public when it comes to combating illegal raptor persecution,” Christian Pichler of WWF emphasises. “Aside from the possibilities of reporting leads over the website www.kaiseradler.at and the poison hotline 0676-444 66 12, we have also developed a “Birdcrime” app.” (Available on Android devices).

Matthias Schmidt and Christian Pichler appeal to the general public to be attentive: “If you discover dead animals, meat baits, suspicious chicken eggs a long way from the nearest farm, or anything similar, please report these finds! Only together will we be able to stop human persecution from being the main threat to raptors.”