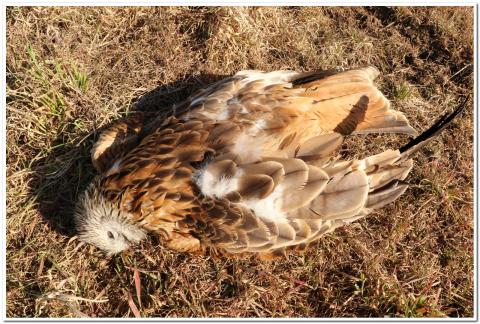 “The brashness with which raptors and other animals are repeatedly killed here makes me almost speechless,” says Matthias Schmidt of the bird conservation organisation BirdLife Austria. For years now, the area around Zistersdorf in Lower Austria has constituted a hotspot of illegal raptor persecution: in no other region in Austria have more poisoned baits and poisoned raptors been discovered. Since early 2016, a total of over 40 protected raptors were verifiably killed in the greater Zistersdorf area, not counting a further number of discovered birds that had died under mysterious circumstances, and a large number of mammals.

After the first reports of dead animals near Großinzersdorf in mid February, a specially-trained team of sniffer dogs was deployed for the first time in Austria. “The use of dogs in fighting illegal raptor persecution has proven itself many times internationally,” Schmidt reports. “As part of our PannonEagle LIFE project, and in cooperation with the authorities and our BirdLife partner in the Czech Republic, we were able to request and deploy specially-trained sniffer dogs for the first time in Austria.” The two four-legged poison-sniffer experts Sam and Vickie from the Czech Republic were joined by the Austrian conservation dog Charlie in their wide-ranging search of the area. The result: one further Red Kite, 7 Common Buzzards, one Common Raven, and a large number of dead mammals were sniffed out, as well as two poisoned baits. “The dead animals were spread over almost the entire municipal area of Großinzersdorf and exhibited different degrees of decay,” Schmidt recalls, and concludes, “the poisonings must have been ongoing for weeks or even months.”

“Despite police reports, investigations, and educational work, the murdering of strictly protected animals has merrily continued in Großinzersdorf!” Schmidt criticises. “The local hunting supervisors appear to be unable to cope and urgently require assistance.” No perpetrators have yet been tracked down.

“Whoever the culprits are, it is time to stop them and their game,” demands Thomas Hansmann, head of the Lower Austrian environmental advocate’s office. “New, more effective paths must be taken to ensure conformity with the laws. Therefore, I demand an external hunting supervision system, which must be implemented as soon as possible!”

“Due to the long history and wide distribution of discoveries in the area, we must assume that we are not just dealing with an isolated, solitary perpetrator,” raptor expert Matthias Schmidt explains, and goes on to demand, “The systematic placement of poisoned baits has been endangering animals and humans in Großinzersdorf for years. A temporary suspension of all hunting activities – on a voluntary or enforced basis – appears more than necessary and justified.”

To combat poisoners, the hunting community and watchful citizens are requested to report dead or wounded animals – raptors are most commonly affected. The reporting platform www.kaiseradler.at  and the App birdcrime can be used to make a report. Suspected cases