Blessing in disguise for a female eagle 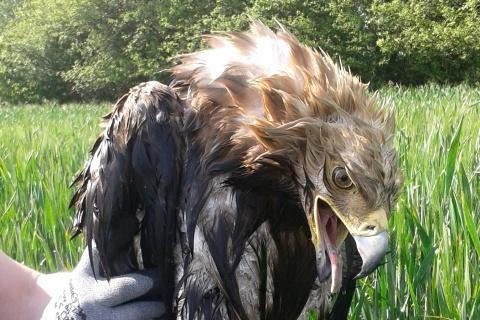 On Sunday, 19 May 2019, a non-flying female Imperial Eagle was found near its nest in the vicinity of Hlohovec (Slovakia). It was an individual of the pair which we have been monitoring for a long time and which shifts between several nesting localities.

"The finding was reported by representatives of the local hunting association, with which we cooperate very well because they not only tolerate the eagles in their territory but they also protect them. The female eagle was soaking wet and unable to fly up. Based on its ring we know it comes from Hungary and it likes it here in Slovakia. When our team arrived to the area, both female and male eagles had already been flying above us. It appeared that the female had dried out little by little and returned to the sky. It is a very uncommon and peculiar case. I have been monitoring raptor species for 45 years and I have never seen a bird so wet it was unable to fly. It was probably misfortune with a happy ending.” declared Jozef Chavko, the chairman of the Raptor Protection of Slovakia. 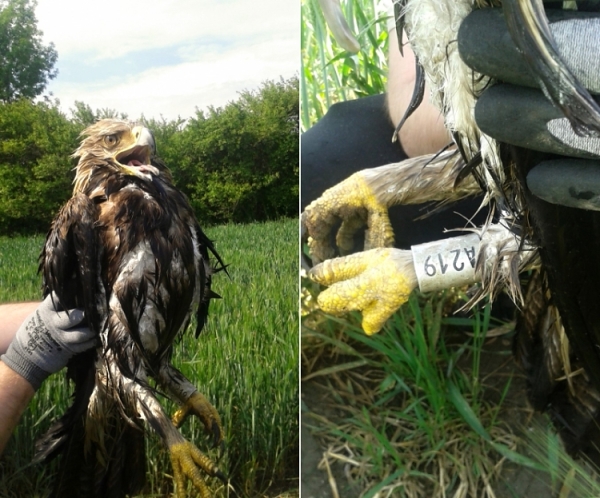 “This year the pair is out of luck because it does not breed. The reason for not breeding in the current season may be the misapplication of agricultural rodenticides, and resulting massive secondary poisoning of almost one hundred of animals recorded in the given area in March 2019. This case is under investigation of the police (more info here). Eagles, naturally fed on dead animals, might be contaminated by the poison and thus their breeding was not successful this year. We are glad they survived and we believe that the situation will improve by the next season and that they will be breeding successfully. We are grateful to the finders for informing us, for helping the female eagle and for documenting the finding,” concluded Chavko.