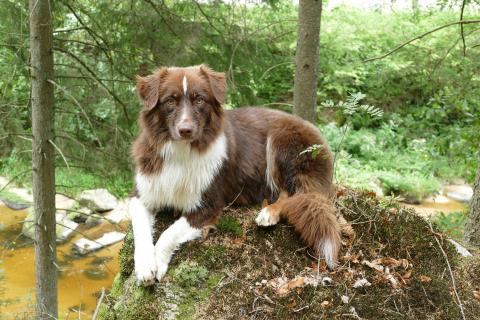 Vienna, 18. December 2017 – The main cause of death for raptors in Central Europe is illegalpersecution from humans. Even species which are endangered and strictly protected, such as the Imperial Eagle, are regularly shot or poisoned. In addition to the international PannonEagle LIFE Project, managed together with the WWF, which has set the objectives of protecting this rare eagle, Birdlife Austria is financing the education of two Nature Conservation Dogs to train them to become tracker dogs for the search for animal corpses and poisonous baits. The four year old Border Collie mix called Olympia and the three year old Labrador mix called Charlie are currently undergoing the one year training to learn this.
The first part of the training has been completed: Both Olympia and Charlie have successfully mastered the module “Scent Recognition and Signaling Behavior” a part of the “Nature Conservation Dogs” education program within the Nature Conservation Association. “Charlie is a very active dog who requires a lot of mental stimulation. Being aware of the illegal persecution of raptors and Charlie’s traits, it made sense to train Charlie to search for killed raptors” reports Charlie’s owner Marion Schindlauer.

Training and Objectives of the Dogs
The goal of this training is that both dogs can be used to locate dead raptors or poisonous bait easier and more effectively. Through this the magnitude of illegal persecution can be better and more accurately reported thus, hopefully, avoiding more victims in the future. Hungary, Italy, Spain and Bulgaria have been using specially trained tracker dogs for a long time. Austria is now striving to follow suit. “With our tracker dogs we anticipate a higher detection rate of attacks against Raptors using poisoned bait.” explains Matthias Schmidt, expert from BirdLife Austria. Alongside the financing of the training, BirdLife Austria will also cover the costs for equipment, care and veterinary costs for the dogs. “The most important training for the dogs is that they learn not to touch the poison as even the smallest amount can be deadly”, explains Schmidt. “Therefore each dog handler will carry a First Aid kit with an antidote to the poison”.

Reporting Suspicious Cases
After completing this training, BirdLife Austria will call both dogs in to investigate when any report of illegal Raptor prosecution arises. “The most important thing is the rapid reporting of any suspicious cases!”, underlines Schmidt and makes the appeal: “Should you discover any dead animals, meat which looks liked it could be used as bait, suspicious chicken eggs slightly away from a farm or anything similar, please inform us straight away!”

Hotspot Lower Austia
Unfortunately there is enough opportunity for employing the four-legged helpers. Particulary in Lower Austria dead raptors are found again and again. More than 100 raptors have provably fallen victims to illegal persecution within the last few years. But apart from these known cases, the real numbers are supposed to be considerably higher. The employment of the dogs will increase the probability of finding more victims, as Hungary and Spain have proven successfully. „In any case, also in Austria the education and employment of the dogs will pay of and improve the protection of raptors“, remarks Schmidt optimistically.