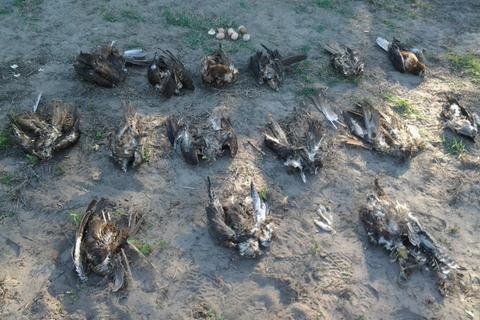 The conservation organisations BirdLife and WWF are alarmed. In the most recent publication of the Lower Austrian provincial hunting association (newsletter dated 9.11.2017), raptors are portrayed as scapegoats for low densities of small game, and their shooting is called for in the mid-term. This contradicts the EU Birds Directive and Lower Austrian conservation and hunting law.

“The claims of the Lower Austrian provincial hunting association that raptors, as anthropophilous species, have contributed to a decrease of breeding bird species, and are negatively affecting biodiversity and species conservation efforts, are simply false!”, Matthias Schmidt, raptor expert at BirdLife Austria, admonishes. All raptor species are protected Europe-wide. Schmidt adds, “It looks as though the Lower Austrian provincial hunting association were working towards eliminating raptors as supposed hunting rivals in the future. We cannot accept that!”

“The shooting of threatened animal species appears to be coming back into fashion – negative sentiments are purposefully and openly being stirred against wolves, otters and others – all of which endangered species. Now it’s raptors’ turn,” Arno Aschauer, team leader of species conservation at WWF Austria is concerned.

Habitat destruction as cause
Lower numbers of small game are primarily due to a loss of quality in the animals’ habitats, which in turn is caused by intensification of agricultural use. “Whoever wishes to protect small game, should campaign for long-term habitat improvements,” Aschauer recommends, “and not falsely blame raptors for the decline. Their influence on small game numbers must be seen as natural.”

Hotspot of illegal raptor persecution in Lower Austria
Portraying the persecution of raptors as a species conservation measure is wrong and scornful at once!”, both experts agree. Illegal persecution of raptors in Central Europe currently constitutes the main cause of death in a whole row of strictly protected raptor species, such as the globally threatened Imperial Eagle or the Red Kite. In Lower Austria, in particular, there are repeated cases of illegal persecution of raptors. The region around Zistersdorf appears to be a real “Bermuda triangle” for raptors. “More than 30 raptors have been killed there in the past years, and the estimated number of unreported cases is probably much higher,” Matthias Schmidt reports.

Commitment to raptor conservation demanded
“Due to these recent statements, we are concerned that comprehensive raptor conservation and long-term solutions to problems are mere lip service by the Lower Austrian provincial hunting association,” say Schmidt and Aschauer. “Instead of supporting those hunters who campaign for habitat improvements and raptor protection, the association is pouring oil on the fire.”

BirdLife Austria and WWF therefore call on the Lower Austrian provincial hunting association to fully commit to raptor conservation and to promote habitat improvement instead of cheap scapegoat politics.