Another successful nest guarding program in Serbia is completed! 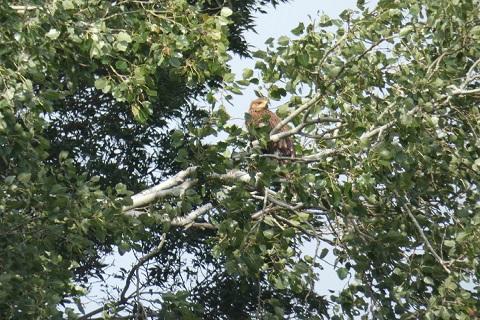 After four months of daily monitoring and prevention of disturbance around the nest of the only remaining breeding IE pair in Serbia, the program was successfully completed with the fledgling named Nada (Hope)!

The eagle pair on the north of Banat, in the SNR "Pastures of the Great Bustard", is unfortunately the only known remaining breeding pair of imperial eagles in Serbia. Before the onset of the PannonEagle project, this pair that is known since 2008, had only two successful breeding attempts, but now since the establishment of the nest guarding program we have two consecutive fruitful nests in two years. After the last year's nest was lost due to a heavy storm that knocked down the tree, eagles have made a new nest nearby, however on a much less suitable site. This year, the nest was on the border of the reserve, in a significantly less isolated area where there were more pressures from the surrounding landuse practices. 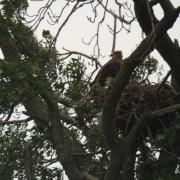 Fortunately, since the 15th of March and up to the day of fledging, BirdLife Serbia (Bird Protection and Study Society of Serbia) team was there to secure a delicate balance between the needs of the eagles and the needs of local land users. Key compromises had to be made with hunters, farmers, cattle herders, field inspectors etc. The late onset of incubation and early mowing season had combined into the biggest challenge as the mowing started during the most sensitive time. Achieved cooperation with the locals was essential in preventing breeding disruption and abandoning of the nest. Over 30 volunteers have contributed to the success of this year's program. They have with great devotion and endurance made sure that the nest was monitored without interruption so that there could be timely reactions and gathered valuable data on eagles’ behaviour. So, owing to out great team there is now a new Hope!

The only eaglet from this year's nest is a large and strong female, which has finally taken her first flight on Monday, 23.07., around 4 pm. The name Nada (Hope) was chosen by the public, responding to the open call from BirdLife Serbia. The name fits perfectly as each new eaglet is a new hope for us to have new pairs forming in the area, and keep the imperial eagles on the list of breeding birds in Serbia!