The 2017 field season in numbers 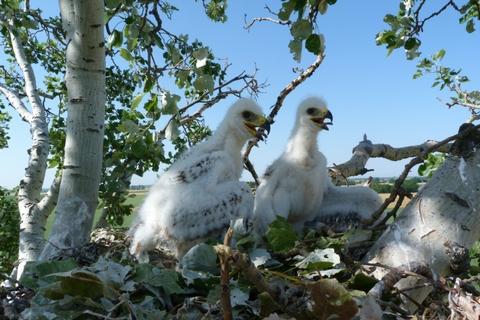 14.03.2018
The Hungarian population was estimated to be around 230 pairs, which is a result of a steady increase in the past decades while being on the brink of extinction in the 1980s.

In collaboration with the ranger service of national parks, we recorded territorial pairs in 219 sites, and active nest were found in 218 cases. Out of 207 pairs 161 (78%) managed to fledge chicks successfully. Altogether 299 eaglets fledged, of which 201 individuals (67%) got a unique coded ring. The fledging success (1.44 chicks/nesting pair) was somewhat above the multi-annual average in 2017.

In 2017, 22 injured Eastern Imperial Eagles were found in Hungary. Three of those were certainly and one eagle was most likely victims of poisoning. One eagle collided with an electric cable, three birds were victims of collision with train or car. Additionally, three individuals died due to electrocution while eleven of them perished by unknown reasons. Out of those 22 eagles, 18 were found dead or died shortly after its discovery. Only three birds could be saved and released back to the wild, however, one individual is still being treated.