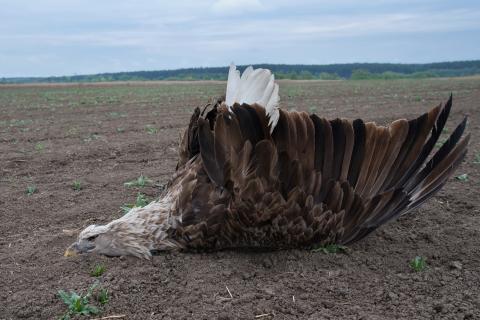 The White-tailed eagle family was poisoned in Bzenecká Doubrava - Strážnické Pomoraví, which is a Special Protection Area in the Czech Republic.  It was a couple that have been nesting on the site since 2017, having one chick each year. The Czech Society for Ornithology cooperated with Czech State Forest to protect the nest so that the pair could nest in peace. It didn't work out this year. The cause of death is probably carbofuran poisoning. The case is being investigated by the police.

Freshly dead male of White-tailed eagle were found on Wednesday, April 29, by ornithologists at Bzenecká Doubrava - Strážnické Pomoraví, where this critically endangered species has been trying to nest since 2006. “Based on the finding of the dead male, we checked the whole site. We found a dead female on the ground near the nest and there was a dead chick on the nest," said Gašpar Čamlík from the South Moravian branch of the Czech Ornithological Society.

About 130 pairs of White-tailed eagle nest in the Czech Republic. In order to protect them at Bzenecká Doubrava - Strážnické Pomoraví, the ornithologists cooperated with Czech State Forest, that stopped all of their work on the site. Thanks to this, this pair was able to nest successfully for the first time in 2017. "In the years 2017-2019, the couple always brought out one chick. They also had one chick this season. But unfortunately, someone killed the whole family. The cause of death is probably poisoning, "specifies Čamlík.

The case is all the more serious because the globally endangered species of the Eastern imperial eagle, who also nests in a nearby area and is therefore directly endangered by poisoning. Two Red Kites were found here in the previous days. "One of them was poisoned and the other was still alive and is now recovering," Čamlík said.