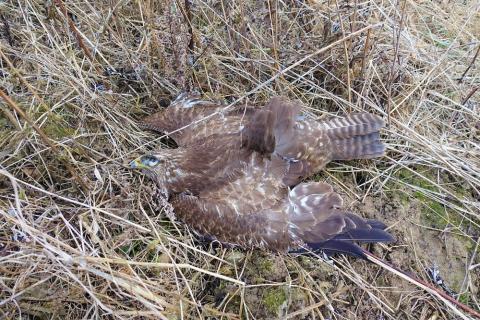 Three poisoned common buzzards were found in Czechia in Klatovy region. Birds were probably poisoned by forbidden poison carbofuran. Cadavers have been taken over by the criminal police which currently works on investigating cases. This year it's the first case of poisoning in Czechia. Dog handler in Czech Society for Ornithology (CSO) Klára Hlubocká also found on the site two poisoned foxes, a poisoned bait and an remains of raven - skeleton full of dead insect, that also points to poisoning, but long time ago.

More than a hundred cases of poisoned birds and other animals. Only one convicted poisoner

Since 2017 when dog unit was founded in Czechia, it's been 104 cases with 488 cadavers that the police took over from CSO. But only one poisoner was convicted. On 29th April 2021, the pond keeper Miloslav Vodička man was found guilty of all three charges - misappropriation of wild animals, possession of narcotics and psychotropic substances and poison and cruelty to animals. The man was given suspended sentence - 2,5 years of imprisonment with a delay of 3,5 years. He poisoned two White-tailed eagles and two ravens near Mečichov in the Strakonice region in March 2019.